IFE city of Yoruba tribe, one of ancient African civilizations founded in 500 B.C

Ife (Yoruba: Ifè, also Ilé-Ifẹ̀) is an ancient Yoruba city in south-western Nigeria. The city is located in present-day Osun State. Ife is about 218 kilometers northeast of Lagos with a population of 509,813.

According to the traditions of the Yoruba religion, Ife was founded by the order of the Supreme God Olodumare by Obatala. It then fell into the hands of his sibling Oduduwa, which created enmity between the two. Oduduwa created a dynasty there, and sons and daughters of this dynasty became rulers of many other kingdoms in Yorubaland. The first Oòni of Ife is a descendant of Oduduwa, which was the 401st Orisha. The present ruler since 2015 is Oba Adeyeye Enitan Ogunwusi Ojaja II, Ooni of Ife who is also a Nigerian accountant. Named as the city of 401 deities, Ife is home to many worshippers of these deities and is where they are routinely celebrated through festivals.

Ilé-Ifè is famous worldwide for its ancient and naturalistic bronze, stone and terracotta sculptures, dating back to between 1200 and 1400 A.D

Mythic origin of Ife: Creation of the world 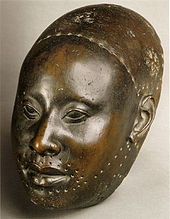 According to Yoruba religion, Olodumare, the Supreme God, ordered Obatala to create the earth, but on his way he found palm wine which he drank and became intoxicated. Therefore, the younger brother of the latter, Oduduwa, took the three items of creation from him, climbed down from the heavens on a chain and threw a handful of earth on the primordial ocean, then put a cockerel on it so that it would scatter the earth, thus creating the land on which Ile Ife would be built. Oduduwa planted a palm nut in a hole in the newly formed land and from there sprang a great tree with sixteen branches, a symbolic representation of the clans of the early Ife city-state. The usurpation of creation, by Oduduwa, gave rise to the ever-lasting conflict between him and his elder brother Obatala, which is still re-enacted in the modern era by the cult groups of the two clans during the Itapa New Year festival. On account of his creation of the world, Oduduwa became the ancestor of the first divine king of the Yoruba, while Obatala is believed to have created the first Yoruba people out of clay. The meaning of the word “ife” in Yoruba is “expansion”; “Ile-Ife” is therefore in reference to the myth of origin as “The Land of Expansion”.

Origin of the regional states: Dispersal from the holy city

Oduduwa had sons, daughters, and a grandson, who went on to found their own kingdoms and empires, namely Ila Orangun, Owu, Ketu, Sabe, Egba, Popo and Oyo. Oranmiyan, Oduduwa’s last born, was one of his father’s principal ministers and overseer of the nascent Edo empire after Oduduwa granted the plea of the Edo people for his governance. When Oranmiyan decided to go back to Ile Ife, after a period of service and exile in Benin, he left behind a child named Eweka that he had in the interim with an indigenous princess of Benin. The young boy went on to become the first legitimate ruler and Oba of the second Edo dynasty that has ruled what is now Benin from that day to this. Oranmiyan later went on to found the Oyo empire that stretched at its height from the western banks of the river Niger to the Eastern banks of the river Volta. It would serve as one of the most powerful of Africa’s medieval states, prior to its collapse in the 19th century.

The King (Ooni of Ile-Ife)

The Oòni (or king) of Ife is a descendant of the godking Oduduwa, and is counted first among the Yoruba kings. He is traditionally considered the 401st spirit (Orisha), the only one that speaks. In fact, the royal dynasty of Ife traces its origin back to the founding of the city more than ten thousand years before the birth of Jesus Christ. The present ruler is His Imperial Majesty Oba Enitan Adeyeye Ogunwusi (Ojaja II). The Ooni ascended his throne in 2015. Following the formation of the Yoruba Orisha Congress in 1986, the Ooni acquired an international status the likes of which the holders of his title hadn’t had since the city’s colonisation by the British. Nationally he had always been prominent amongst the Federal Republic of Nigeria’s company of royal Obas, being regarded as the chief priest and custodian of the holy city of all the Yorubas.In former times, the palace of the Ooni of Ife was a structure built of authentic enameled bricks, decorated with artistic porcelain tiles and all sorts of ornaments.  At present, it is a more modern series of buildings. The current Ooni, Oba Adeyeye Enitan Ogunwusi Ojaja II, Ooni of Ife, (born October 17, 1974) is a Nigerian accountant and the 51st Ooni of Ife. He succeeded the late Oba Okunade Sijuwade(Olubuse II) who was the 50th ooni of Ife, and who had died on July 28, 2015.

Cults for the spirits

Ife is well known as the city of 401 deities (also known as irumole or orishas). It is said that every day of the year the traditional worshippers celebrate a festival of one of these deities. Often the festivals extend over more than one day and they involve both priestly activities in the palace and theatrical dramatisations in the rest of the kingdom. Historically the King only appeared in public during the annual Olojo festival (celebration of the new dawn); other important festivals here include the Itapa festival for Obatala and Obameri, the Edi festival for Moremi Ajasoro, and the Igare masqueraders.

Kings and gods were often depicted with large heads because the artists believed that the Ase was held in the head, the Ase being the inner power and energy of a person. Both historic figures of Ife and the offices associated with them are represented. One of the best documented among this is the early king Obalufon II who is said to have invented bronze casting and is honored in the form of a naturalistic copper life-size mask.

The city was a settlement of substantial size between the 12th and 14th centuries, with houses featuring potsherd pavements. Ilé-Ifè is known worldwide for its ancient and naturalistic bronze, stone and terracotta sculptures, which reached their peak of artistic expression between 1200 and 1400 A.D. In the period around 1300 C.E. the artists at Ife developed a refined and naturalistic sculptural tradition in terracotta, stone and copper alloy—copper, brass, and bronze—many of which appear to have been created under the patronage of King Obalufon II, the man who today is identified as the Yoruba patron deity of brass casting, weaving and regalia. After this period, production declined as political and economic power shifted to the nearby kingdom of Benin which, like the Yoruba kingdom of Oyo, developed into a major empire.

Bronze and terracotta art created by this civilization are significant examples of naturalism in pre-colonial African art and are distinguished by their variations in regalia, facial marking patterns, and body proportions. Ancient Ife also was famous for its glass beads which have been found at sites as far away as Mali, Mauritania, and Ghana.

Iron smelting occurred in the Ife region. The yield and efficiency were quite high as the iron smelting process yielded ore grade near 80 percent iron oxide, lean slag possessed less than 60 percent iron oxide, and no greater than the required amount of iron oxide in the slag was left for slag formation. While more excavation is needed to produce a more accurate estimate for the age of the smelting site, it can be approximated to likely being precolonial, during the Late Iron Age.

Igbo Olokun, also known as Olokun Grove, may be one of the earliest workshops for producing glass in West Africa. Glass production may have begun during, if not before, the 11th century. The 11th – 15th century were the peak of glass production (according to Babalola). High lime, high alumina (HLHA) and low lime, high alumina (LLHA) glass are distinct compositions that were developed using locally sourced recipes, raw materials, and pyrotechnology. The presence of HLHA glass beads discovered throughout West Africa (e.g., Igbo-Ukwu in southern Nigeria, Gao and Essouk in Mali, and Kissi in Burkina Faso), after the ninth century CE, reveals the broader importance of this glass industry in the region and shows its participation in regional trade networks (e.g., trans-Saharan trade, trans-Atlantic trade). Glass beads served as “the currency for negotiating political power, economic relations, and cultural/spiritual values” for “Yoruba, West Africans, and the African diaspora.”

In Osun Grove, the distinct glassmaking technology produced by the Yoruba persisted into the seventeenth century.

The main city of Ife is divided into two local government areas: Ife East, headquartered at Oke-ogbo and Ife central at Ajebandele area of the city. Both local governments are composed of a total of 21 political wards. The city has an estimated population of 355,813 people.

Latitudes 7°28′N and 7°45′N and longitudes 4°30′E and 4°34′E. Ile-Ife is a rural area with settlements where agriculture is occupied by most. Ife has an undulating terrain underlain by metamorphic rocks and characterized by two types of soils, deep clay soils on the upper slopes and sandy soils on the lower parts. Within the tropical savanna climate zone of West Africa. It has average rainfall of 1,000–1,250 mm (39–49 in) usually from March to October and a mean relative humidity of 75% to 100%. Ife is east of the city of Ibadan and connected to it through the Ife-Ibadan highway; Ife is also 40 km (25 mi) from Osogbo and has road networks to other cities such as Ede, Ondo and Ilesha. There is the Opa river and reservoir, that serves as a water treatment facility for OAU college.

Ife contains universities that are very well known in Nigeria such as Obafemi Awolowo University formerly University of Ife. It also contains attractions like the Natural History Museum of Nigeria. Ife is home to a regional agricultural center with an area that produces vegetables, grain cacao, tobacco, and cotton. Ife has a few open markets, such as Oja Titun or Odo-gbe market with about 1,500 shops.